The music remains as popular as ever. Founding member Andy Powell, Muddy Manninen, Bob Skeat and Joe Crabtree will perform the entire Live Dates double album as part of their set in Holland on

Don’t miss these exclusive performances.Meet the band after the show and experience an unforgettable evening with Wishbone Ash. Celebrate 40 years of Live Dates 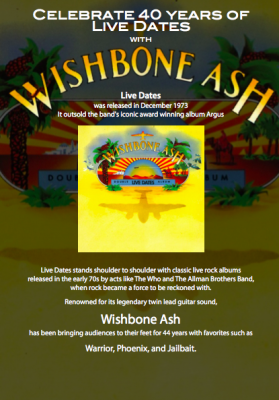 These were the magical years with live (double) albums like Grateful’s Dead “Live/Dead”, Allman Brothers’ “Live at the Fillmore East” and…. Wishbone Ash “Live Dates”. And now I get a chance to see the band perform the songs of the legendary album live at the Burgerweeshuis in Deventer!